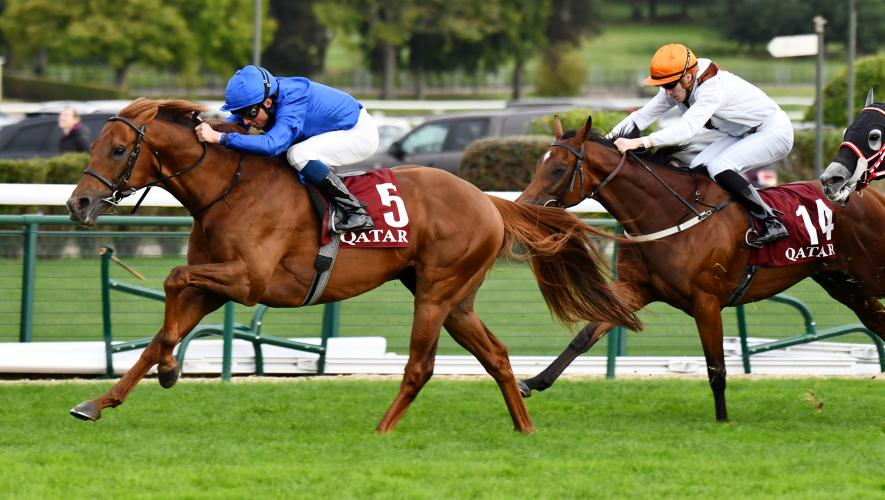 Heavy rain in Paris ensured that Europe’s premier middle-distance contest was run in attritional conditions. Adayar made much of the running before fading close home, while Hurricane Lane also produced a determined display, narrowly missing out on second at the line.

Hopes are high that both Classic winners could stay in training next year, with trainer Charlie Appleby declaring afterwards that he felt the duo could potentially be even better as four-year-olds.

Longchamp’s testing ground proved no problem for Space Blues, who unleashed a stunning turn of foot to take the Prix de la Foret, his second G1 success in France. A trip to Del Mar for next month’s Breeders’ Cup Mile could now be on the cards for the Dubawi entire.

There were also notable wins on the Saturday of Arc weekend, with progressive stayers Manobo and Kemari fighting out the finish to the G2 Prix Chaudenay. Real World continued his ascent through the ranks when striking in the G2 Prix Daniel Wildenstein - a fourth consecutive win for the four-year-old, who will aim to continue his superb form into the Dubai World Cup Carnival.

Godolphin’s Australia team secured a pair of G2 victories at Flemington on Saturday. G1-winning seven-year-old Kementari rolled back the years when getting up close home in the Gilgai Stakes, while Kallos stepped up significantly from a maiden success with a comfortable win in the Danehill Stakes.

Maxfield looks set to join Essential Quality in this year’s Breeders’ Cup Classic after filling the runner-up spot in the G1 Woodward Stakes at Belmont Park. For a second consecutive start, the Street Sense colt chased home a horse who made all in a tactical race, and a different pace complexion at Del Mar could play to his strengths.

Anamoe will bid to avenge defeat this weekend in the G1 Caulfield Guineas. The Sires’ Produce Stakes victor powered home to go down by a head to In The Congo in the G1 Golden Rose at Rosehill last month. Colette, who was scratched from the Turnbull Stakes last week, could line up on the same card in the G1 Caulfield Stakes.

Keeneland’s Fall Meet gets underway this week and ever-consistent four-year-old Pixelate may look to try and follow up his recent G3 Mint Million victory in one of Saturday’s highlights, the G1 Keeneland Turf Mile.

Newmarket’s Dubai Future Champions Festival takes centre stage in the UK. Vincent O’Brien National Stakes hero Native Trail will be aiming to cement his place as Europe’s top juvenile with victory in the G1 Darley Dewhurst Stakes. He may yet be joined in the race by Noble Truth, who could make a quick turnaround after finishing second in the G1 Prix Jean-Luc Lagardere at Longchamp over the weekend.