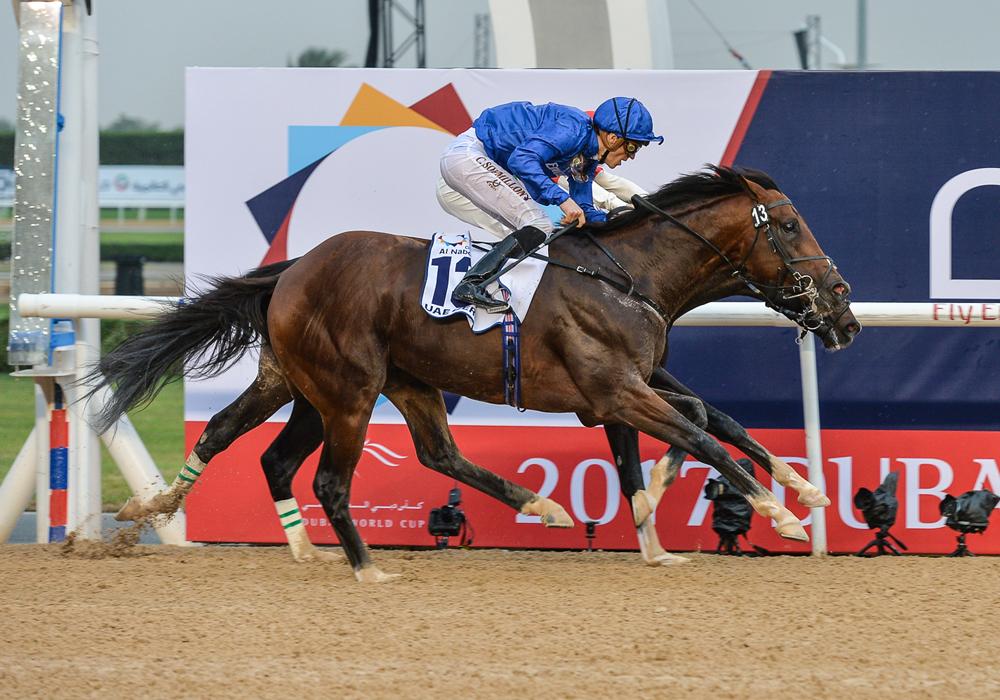 Born at Sheikh Mohammed’s Woodpark Stud in Ireland on 24 March 2014, Thunder Snow was the fourth foal out of Eastern Joy, who by then had already produced a G1 performer in Ihtimal (Shamardal). Eastern Joy is also the dam of G2 May Hill winner Always Smile (Cape Cross) who finished second in the G1 Sun Chariot, plus G3 Oh So Sharp Stakes heroine First Victory (Teofilo).

Another homebred for Sheikh Mohammed, Eastern Joy hails from the family of great racemare Balanchine.

Joining Saeed bin Suroor’s stable in early 2016, the son of Helmet made his racecourse debut on 31 May 2017 and duly won, readily seeing off 11 rivals over six furlongs at Leicester. A swift step up in class followed and two starts later he added his first Black type when second in the G2 Vintage Stakes at Goodwood.

Next time out, Thunder Snow was beaten just a head in the G2 Champagne Stakes, before finishing a creditable fourth in the G1 Dewhurst Stakes.

Lining up in the G1 Criterium International at Saint-Cloud later that month, Thunder Snow could not have been more impressive when becoming his first-season sire’s very first winner at the highest level, producing a devastating turn of foot two furlongs out to skip clear of his rivals and win by a full five lengths.

Thunder Snow returned at three in the UAE 2,000 Guineas and soon answered any doubts as to whether he could replicate his form on the dirt as he romped to a five-and-three-quarter-length victory at Meydan. He then threw himself into contention for the Kentucky Derby with a fast-finishing win in the G2 UAE Derby.

While things didn’t work out as planned at Churchill Downs, Thunder Snow was back on form just three weeks later when finishing second in the Irish 2,000 Guineas.

Third to fellow Godolphin runner Barney Roy in the St James’s Palace Stakes at Royal Ascot next time out, Thunder Snow followed up with one of the most brilliant performances of his career with a dominant win in the G1 Prix Jean Prat at Chantilly.

Sent straight to the front, Thunder Snow dictated the pace throughout the one-mile contest and once asked to quicken two furlongs from home, was never troubled by his rivals and eased clear to win by just over a length.

Thunder Snow opened his 2018 campaign at Meydan, taking second in the G2 Al Maktoum Challenge R1, before going one better in R2 a few weeks later.

Dubai World Cup night 2018 was an outstanding one for Team Godolphin, who by the time Thunder Snow lined up in the main event, had already bagged three of the G1 races up for grabs.

Thunder Snow played his part to perfection, once again dictating from the front before moving further and further clear in the straight and eventually winning by almost six lengths to round off a spectacular evening in truly sensational style.