Modern Games gained a third G1 in as many countries and booked a return to the Breeders’ Cup with an exhilarating success in the Woodbine Mile in Canada on Saturday, 17 September.

The G1 Poule d’Essai des Poulains victor, who also annexed last season’s G1 Breeders’ Cup Juvenile Turf, was held up towards the rear of the field by William Buick before improving a couple of places after the first three furlongs.

He still had seven rivals in front of him turning for home but started to close after being switched towards the centre of the course entering the straight.

Finest Sound forced Modern Games even wider just inside the final quarter-mile but the Charlie Appleby-trained colt unleashed a tremendous turn of foot, powering past the field in a matter of strides.

Modern Games streaked clear entering the final furlong before being eased in the final strides to beat G1 winner Ivar by five and a quarter lengths in the Breeders’ Cup Mile qualifier, becoming the first three-year-old to win the race in the process.

William Buick said: “Modern Games was super impressive. He is very good when he gets fast ground and a good pace to run at, as he showed there.

“He was in a great rhythm and we just had to wait for some racing room – he shifted out a little on the apex of the turn but I think the whole field did. He changed gears instantly and, if anything, I ended up in front sooner than I anticipated.

“Modern Games was very good at the Breeders’ Cup last year and he has always been very streetwise. He is very intelligent and adapts very quickly to different situations. He won the French Guineas, didn’t quite stay in the French Derby and was second to Baaeed last time, so he really deserved to get his head in front today.” 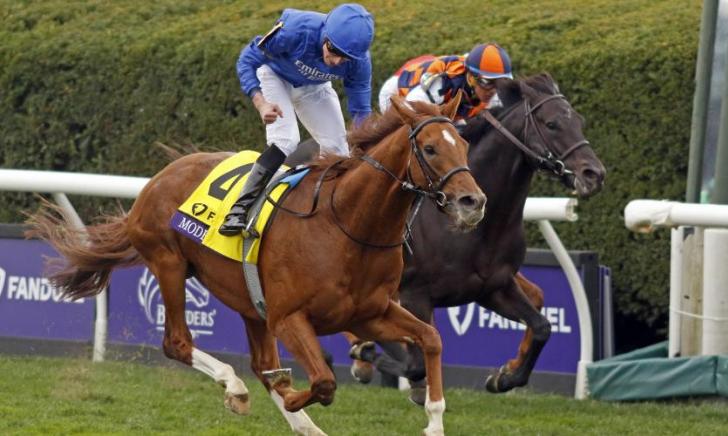