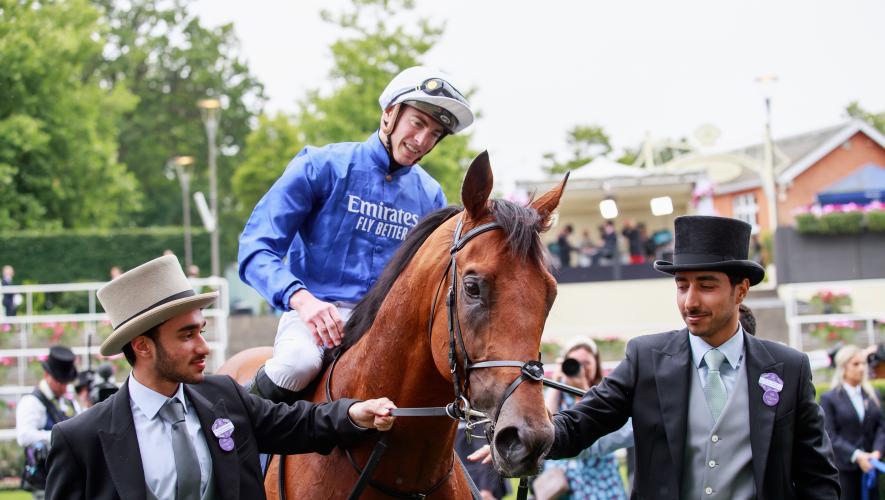 Coroebus joined a select group of horses to win both the 2,000 Guineas and St James’s Palace Stakes with a gritty display in Tuesday’s G1 highlight for three-year-olds.

Having twice proved himself the best of the Classic crop over a mile, the Dubawi colt will be hoping to continue his dominance when he tackles the older generation on his next start. The Sussex Stakes at Goodwood looks a possible option, where his rivals could include the unbeaten Queen Anne Stakes winner Baaeed.

Dubai Future also triumphed for Dubawi on Tuesday, with a dominant victory in the Listed Wolferton Stakes. A return to Group company beckons for the consistent six-year-old, who has run with credit in the last two renewals of the Dubai Sheema Classic.

Another son of Dubawi, Secret State, completed a hat-trick of wins in Thursday’s King George V Handicap. The three-year-old looks set to have his sights raised significantly over the coming months, with the G2 Great Voltigeur Stakes at York in August a potential target.

The outstanding week for Dubawi continued on Saturday, with the sire responsible for the first two home in a thrilling G1 Platinum Jubilee Stakes.

Naval Crown had been beaten into second by Creative Force in the 2021 Jersey Stakes but reversed the form over six furlongs, with only a neck separating the pair at the line. Another rematch could be on the cards for the sprinters in next month’s G1 Darley July Cup.

Noble Truth emulated Creative Force by gamely taking the G3 Jersey Stakes on the same card. The three-year-old looks set to be on his travels later in the year with the lucrative Golden Eagle in Australia, won by Colette in 2020, an intriguing option for the son of Kingman.

In addition to five wins, there were also several noteworthy performances in defeat over the five days.

Real World finished second to Baaeed for a second time in the Queen Anne Stakes, with exciting juvenile Mawj filling the same spot in the G3 Albany Stakes.

Hurricane Lane produced a pleasing effort on ground quicker than ideal as he came home third on his seasonal return in the G2 Hardwicke Stakes, while Hafit was narrowly beaten in a three-way battle for the G2 Queen’s Vase.