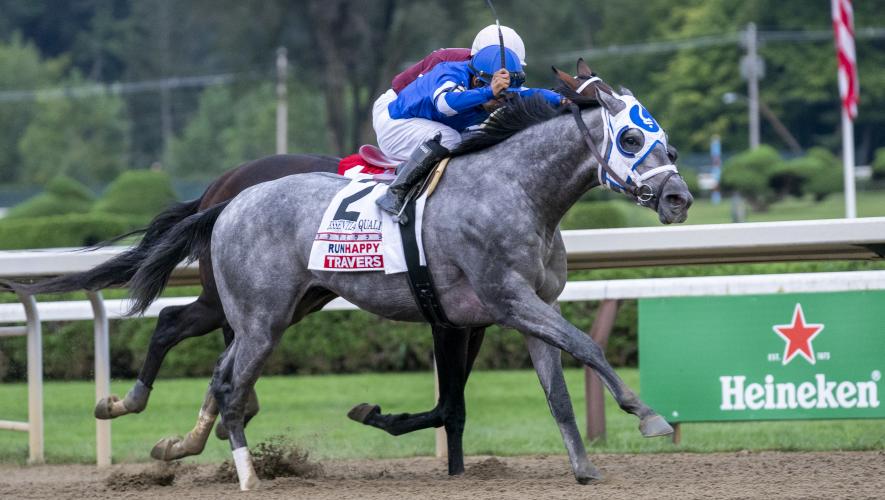 Essential Quality came out on top in another stretch duel as he continued his domination of the three-year-old division in the G1 Travers Stakes at Saratoga on Saturday.

This season’s Belmont Stakes victor once again showed his trademark resilience when edging out Midnight Bourbon for his eighth win in nine starts, four of which have come at G1 level.

He also becomes the first Champion two-year-old to win the Travers since Street Sense in 2007, while his success in the “Midsummer Derby” helped Godolphin surpass the £8-million prize money mark in a year for the first time in North America.

Essential Quality’s end of season aim will be to head out to California for the G1 Breeders’ Cup Classic at Del Mar in November, with the possibility of taking in another race in the interim set to be discussed over the next couple of weeks.

Lake Avenue also ran an excellent race at Saratoga on Saturday as she finished second in the G1 Ballerina Handicap, while Benbatl made a pleasing return to action when going down by a short head in the G2 Celebration Mile at Goodwood in the UK.

Benbatl, who has run against G1 winners from six continents during a remarkable career, will aim for a fourth G1 success of his own at Ascot on Champions Day in either the Queen Elizbeth II Stakes or the Champion Stakes. A potential outing in Newmarket’s G2 Joel Stakes beforehand is also being considered for the evergreen seven-year-old.

Three further Stakes placings in Australia over the weekend included Paulele, who went down by a neck when filling the runner-up spot in the G3 San Domenico Stakes at Kembla Grange.

Upcoming highlights this week include the Sprint Cup at Haydock Park on Saturday, in which G3 Jersey Stakes hero Creative Force will be hoping to graduate to G1 honours after a string of fine performances this year.

French racing returns to Paris this week with the G1 Prix du Moulin de Longchamp taking centre stage on Sunday. Both Victor Ludorum and Midtown remain in the mix for the mile contest, won in recent years by Ribchester and Persian King.