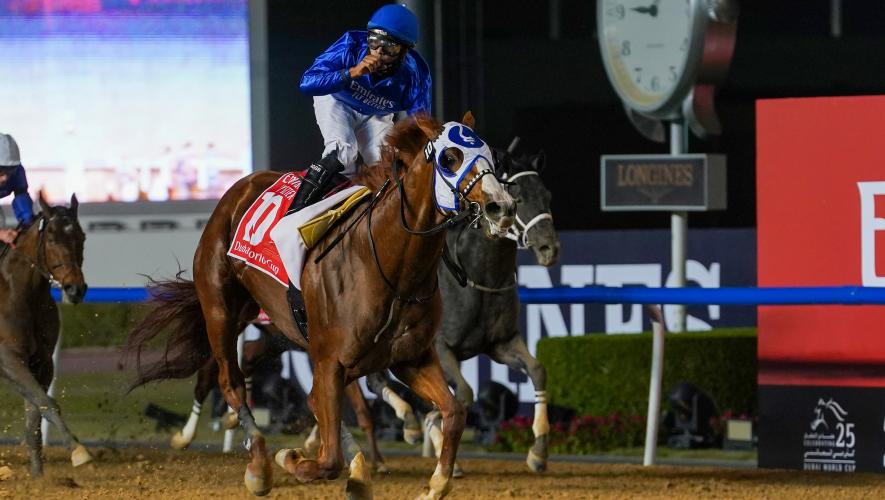 Mystic Guide, a sensational winner of the 2021 G1 Dubai World Cup Sponsored by Emirates Airline, has been retired to take up stallion duties at Jonabell Farm for the 2023 breeding season.

Trainer Michael Stidham said: “Horses of Mystic Guide’s calibre just don’t come along too often. To win the Dubai World Cup for Godolphin was obviously a special moment for me and my team and one that I’ll always remember. I’m sure the next chapter in his life will be equally as exciting.”

The homebred son of Ghostzapper became the first Godolphin horse trained in the United States to capture the centrepiece of the UAE season as he powered to a near four-length victory over Japanese Champion Chuwa Wizard.

That success came on the back of an imperious display in the G3 Razorback Handicap at Oaklawn Park on Mystic Guide’s four-year-old return. Scoring by six lengths on a sloppy track, the Stidham-trained colt ran to a Beyer Speed Figure of 108, a mark bettered only by Essential Quality during the first half of 2021 beyond a mile.

Mystic Guide’s exploits were recognised at the 2021 Eclipse Awards, where he was a finalist in the Older Dirt Male category alongside Godolphin’s G1 Clark Stakes winner Maxfield and Breeders’ Cup Classic scorer Knicks Go.

In total, Mystic Guide won or placed in all nine of his career appearances, with four wins also including a determined victory in the G2 Jim Dandy Stakes at Saratoga in 2020 – a race won by current Darley stallions Medaglia d’Oro, Street Sense and Essential Quality. He also ran second by just three-quarters of a length in the G1 Jockey Club Gold Cup.

Mystic Guide retires as the highest-earning son of 2004 World Champion Ghostzapper, with career prize money in excess of US$7.5 million. His dam is the outstanding A. P. Indy mare Music Note, a five-time G1 winner for Godolphin who herself is a granddaughter of US Champion filly It’s In The Air.

Dan Pride, Chief Operating Officer of Godolphin in America said, “The decision has been made to retire Mystic Guide due to a soft tissue injury. The timing unfortunately rules out his major summer and fall targets and as a result he will take up stud duties at Jonabell Farm. He proved himself a top-calibre horse on the world stage and has an outstanding pedigree with an impressive physical to match. We can’t wait for breeders to be able to see him in person.”

A fee for Mystic Guide will be announced in due course.