Godolphin’s Native Trail goes into the clash with unbeaten Baaeed in Wednesday’s G1 Juddmonte International at York with an impressive record of delivering on the big occasion, which trainer Charlie Appleby believes gives him excellent credentials for the challenge.

“It’s a fantastic race with a rich history and has been won by some great horses,” Appleby said. “Baaeed is top class with an outstanding profile, who holds everything in front of him, but we feel we have the right horse to take him on and make a race of it.

“Racing likes to see good horses go at one another and hopefully that’s what we will see at York,” the trainer added. “Native Trail’s work has been great, “ Appleby continued.

“The condition of this horse is second to none. He thrives on his work, and after giving him a break following the Eclipse last month, we have been winding his work up week by week.

“He is thriving, you can see that in him as an individual. He is progressing with each piece of work. He goes into the race off the back of a very uncomplicated training program. You ask, and he delivers,” he added.

Native Trail was a precocious juvenile, who dominated his year, but it has been more than his physique that has seen him add another G1 to his record at three.

“He has always been a very mature individual physically. He was a champion two-year-old, who has carried that level of form on from two to three. He’s in great order. He’s going to be one of the stand-out picks in the paddock, that’s for sure, because he’s a strapping, good-looking individual.

“Baaeed is the horse we all have to beat and respect. But the confidence we take into the race is that Native Trail has been over the trip. He finished a creditable third against some very nice middle-distance horses at Sandown. He’s a champion two-year-old, who has gone on to win a Classic at three…a multiple G1 winner with six wins from eight starts…that’s an impressive CV,” he added.

Charlie Appleby said: “Local Dynasty is a son of Dubawi, who won his only start at Newmarket impressively. He’s come out of the race well and he’s the type, who could naturally progress into a Pattern horse. He’s got a very progressive profile.

STRONG HAND IN THE VOLTIGEUR

Secret State will be attempting his fifth win on the trot when tackling the G2 Great Voltigeur, a race that over the years has been a guide to the G1 St Leger and even the G1 Melbourne Cup. He is backed up by stablemate Walk Of Stars.

Appleby said: “Secret State won the King George V Handicap at Ascot and the form of that race has worked out well, with the second Deauville Legend going on to win the Bahrain Trophy at Newmarket.

“Secret State backed that up at Goodwood with another good performance there, over the (12f) distance. He’s a Dubawi, who is progressing race on race. He goes there a worthy favourite.

“We are lucky to have New London, who is currently favourite for the St Leger, which has always been his target. As for Secret State, we will make a decision regarding his trip after the Voltigeur. There’s a question mark over whether he would get a strong 1m 6f. We will see in time.”

Walk Of Stars has had one start since being gelded, finishing a promising third to Deauville Legend in the Bahrain Trophy at Newmarket.

“We’ve always held him in high regard. We ran him in the Derby because we felt he was one of our better middle-distance horses at the time. Since gelding, we have seen a marked improvement in him mentally. If he can put it together, a race such as the Voltigeur is well within his compass.

“We have used this race before as a guide to future targets at home and abroad, with Yibir being a good example. If he runs well, we might look at America for him later in the year,” he added.

DOING THE GIMCRACK IN STYLE

Noble Style by-passed Royal Ascot in June but has always been highly-regarded at Moulton Paddocks and is seen as an ideal candidate for the historic G2 Gimcrack Stakes, over 6f.

Charlie Appleby said: “He looked very smart when winning his maiden at Ascot but I was not entirely happy with him coming into the Royal meeting so we missed his intended target there.

“I’m a believer that sometimes missing those type of races in the summer can benefit them in the second half of the season. He had his break, then he came back under a penalty in a Newmarket novice. We got the job done but, most importantly, we could see improvement for that run.

“His work has been good. He’s definitely come on for that experience. The Gimcrack is the right race for him now, but in time, I think he will benefit for stepping up in trip,” he added.

BATTLE-HARDENED LAZULI BACKS UP IN NUNTHORPE

Lazuli has become a familiar face in big sprints of late and is ready to have another crack at a major five-furlong contest, according to his trainer.

Charlie Appleby said: “I think the draw at Goodwood (in the King George Stakes) was a negative factor for Lazuli. It was a good, solid run nevertheless, and he remains in good order.

“In the Nunthorpe, experience is invaluable. We put a line through Ascot, where he was stuck out on a wing, but he came on for the race. What he brings to the Nunthorpe is an abundance of experience at the 5f trip. He will be a player.”

Desert Order and City Of Kings will carry the hopes of Godolphin in the Convivial Maiden, over 7f, a race that never fails to generate interest due to the high quality of entry over the years.

Charlie Appleby said: “Desert Order has twice finished second but Sandown seemed to ride like a good race. He brings experience and a good deal of ability to this. He might not need to improve much more to win a Convivial.”

“City Of Kings was involved in a stalls incident at Newmarket, but all being well, we would like to run him in the Convivial, as well. A stalls test pass is required.”

There are several good chances for Godolphin on the fourth and final day at York, headed by stalwart Global Storm, who backs up for another crack at the Ebor, over 1m 6f.

Charlie Appleby said: “Global Storm ran a creditable race in last year’s Ebor. His best race this year was to finish third in the Princess Of Wales’s Stakes at Newmarket (behind stablemate Yibir).

“He put up another good performance at Goodwood, making it hard for himself. But he has come out of the race well. He’s battle-hardened but probably at the wrong end of the handicap to be winning it. But he will run a big race.”

More opportunities await Godolphin in the Melrose Handicap, also over 1m 6f, in which Wild Crusade and Al Nafir take their chance.

Appleby said: “The Melrose is a great staying handicap for the younger brigade and also a ‘win and you’re in’ for the Ebor. We’ve got two nice Dubawis going for this.

“Wild Crusade put up a great front-running effort at Ascot, with runner-up Warren Point going on to win at Goodwood, so unfortunately he took a rise in the handicap for standing in his box at home.

“He looks a nice staying type for the future and this is a good stepping stone into better company.

“Al Nafir is a full brother to Ghaiyyath and we are going further up in trip with this horse. His pedigree says he will be suited by it.”

Valiant Prince tackles the G3 Strensall Stakes, with Appleby pointing out: “He goes there in great order. We have purposely targeted this race as we believe stepping up in trip will suit him.”

Al Suhail will line up in the G2 City Of York Stakes, over 7f, won last year by Space Blues, who went on to win a Breeders’ Cup for Godolphin.

Appleby said: “Al Suhail has always shown a huge amount of talent. He won at Newmarket in the autumn last year but he then disappointed on his only start at Meydan. His prep for this has been faultless. His work has been great. I feel it’s the right race for him. “ 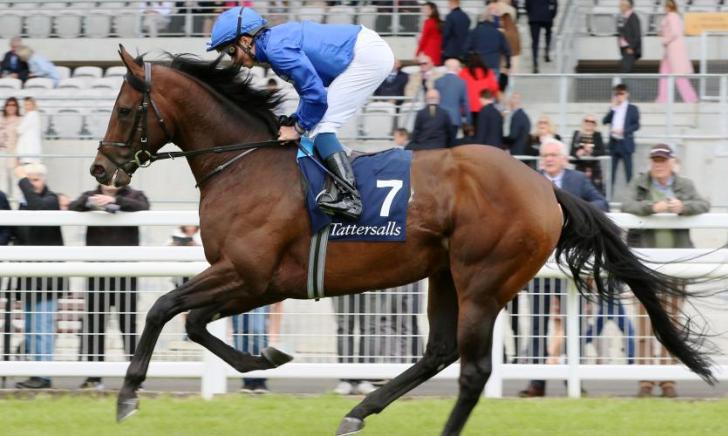